At 7:30 pm exactly 1 week ago today Priyesh, Vu and I packed up and left for the airport. At 9:50 our plane departed and at 11:50pm we landed in San Francisco California ready to conquer the world that lay ahead of us! ... By 12:15 Priyesh and I were lost somewhere in the city without our luggage, Vu, or a place to live. It was a scary and lonely moment that definitely tested my confidence in our decision to move out here. Like a small pond fish jumping into a waterfall, our budding Minnesota startup once full of limitless potential was tested against the fast moving big city scene of the Valley. I like to think my survival instincts kicked in and I reacted calmly and decisively but Priyesh describes it more as freaking out. Luckily due to the miracle of cellular technology Vu and James were able to find us an hour later and our startup, along with all of its members survived the first night! 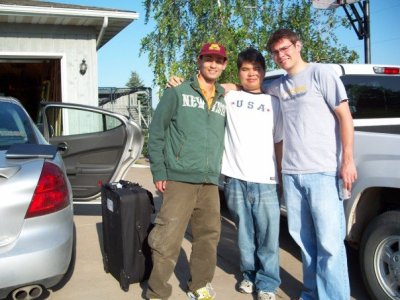 The four of us along with Jame's girlfriend Anna are subletting a condo in Daly City, just 10 minutes south of San Francisco. The place is big and the complex has two pools and a nice club house that I will make my office as soon as we can figure out a way to get our internet out that far. We have few furnishings except for a kitchen table and a few things we brought and have collected: air mattresses, couches from bay area family, homemade computer desk from the side of the road, some lamps, a foosball table. I was expecting a bit more hustle and bustle from the area but our complex happens to be in the middle of a mile of cemetery in each direction. Seriously, check the map. In the case of any sort of zombie attack we're pretty much screwed. James says that with our surplus of Cosco food we could hold out for quite a while, but especially after seeing 28 weeks later I'm not naive enough to think they wouldn't fireball the whole place.

Anyway, you can send us packages (hint: food) at that address though it probably only had a 50% chance of actually getting to us. There seems to be a lot of problems with the way packages are delivered around here.

The good thing about our location is that its only 2 miles from the BART which goes all over the place. I'm going to have to take that and the Caltrain to get to Stanford twice a week for my class. I bought a bike today to make that trip a little shorter. I rode the BART a couple times into San Francisco already to hang out with my friend Josh Aas from Firefox. Unfortunately we weren't out seeing Caroline Smith but he was in town for the amazing WWDC and invited me to hang out with some cool people afterward including some Camino developers, another GSoC student and Ben from the awesome startup Songbird.

I've also been to Stanford twice where we recruited our friend Zain for the team. Zain is a super bright guy who's in the middle of his PhD at Stanford under Mark Horowitz, a founder of Rambus. Zain's hooking us up with a server on the insanely fast stanford network, the original ISP for google! Stanford is an awesome awesome place. They get tons of money from wealthy alumni and venture capital. Their president is an EE professor supposedly worth over a billion dollars. There are startup clubs, classes, and recruitment posters all over. Its an incredibly exciting place. I'm glad I decided to take my summer course there instead of online.

As you can see its been a crazy week, and somehow among all of that we still got quite a bit of work done. More to come on the project soon.

Oh, and a shoutout/congratulations to my friend and reader Zack Garbow. Zack's been somewhat of a patent mentor to me at IBM and just became IBM's youngest Master Inventor breaking the previous record by 4 years! Way to go Zack! You may have 60 more patents than me but I'm still racing you to 100. He also wrote an awesome facebook app. If you're cool you'll add it.