It may not surprise some of you to know that JaredSIM is not my first company, but my fourth. The first I started with my sister in elementary school. We received a children's loom for christmas and started making custom fabric coasters for people at my mom's work. We called them "Mug Rugs" (@copyright 1992) and profited a whopping 3 bucks a piece until we tried to scale and ran into some child labor issues.

My second I started in middle school with my father. I was a trapper and fur foot trader. We trapped a lot of gophers in the fields around where I lived. I spent a good 4 hours a week setting and collecting traps. Our county paid a pretty good price per gopher and I estimate I collected about $300 worth of gophers one summer.

My last business adventure was in the summer of 2004. My friend Ryan was working a typical cubicled internship and was suffering from a mild case of cubical claustrophobia (sometimes referred to as "Am I really going to do this for the rest of my life" syndrome) and had to go on frequent walks to stay sane. I was doing research in the cold dark basement of an optics lab and was really getting down about the lack of variety in the spectrum of light that I experienced throughout my day. It was also a time in my life where I was experimenting with several different vocations trying to find where I belonged.

Most people in technology have had to at one point decide whether to give up their love of the outdoors, or their love of technology. Ryan and I rarely follow the path of those most people and decided we'd get around that decision by making a rare company that does technology outdoors. Our business plan: a Computers and Lemonade stand! 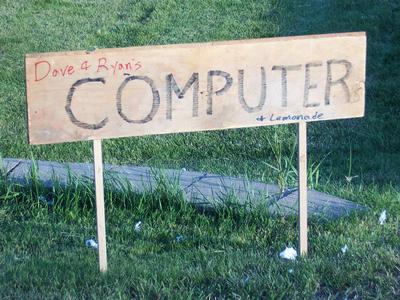 We set up shop on my street and started fixing computers and selling lemonade. We were open for a good 8 hours before it got dark. Unfortunately my street is more like a county road and we only saw about 6 cars go by. None of them apparently had their computers with them, or at least the ones they did have weren't broken.

We did fix 3 computers. Two were for friends we called during our telemarketing campaign. They had much better bargaining techniques than us (they were female) as they got our quality service for the price of two tacos and a chocolate frosty. I'm pretty sure it was all from the dollar menu. The other we fixed for my parents in exchange for a pitcher of lemonade, an investment that didn't pay out as we never actually sold any lemonade.

One of the 6 cars stopped, backed up and said "Do you guys really fix computers?" We answered yes and then she asked "How much?" We hadn't planned that far ahead and looked at each-other and I blurted out "20 dollars." She said she'd be back with her computer and we waited nervously hoping it wasn't an expensive hardware related problem. 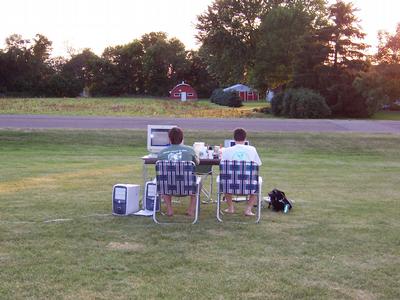 She never came back and by the time it got dark we knew we had some serious flaws in our business plan. We decided to add a sound system to our outdoor computer setup and see if we could make it as an outdoor movie theater. A few people showed up but they all just brought chips and soda instead of money. We had problems legally monetizing that venture.

After that day we discussed the flaws in the plan and decided that we had stupidly violated all three rules of business, which are each titled "Location". We decided to try it again someday in a better spot but were soon back to being wrapped up in our busy technology lives and that day has yet to come. I hope to one day find another business plan that allows me to do computer work outdoors. I think people need to be close to nature, and computer don't have to change that.