Yesterday was my last day at IBM, and today I went back to first grade. To most people that might sound backwards. Personally I don't care what it sounds like, I think its the way to go.

My sister is a first grade teacher and asked me to come into class and demonstrate my robot (yes I'm that cool) and I also decided to bring in an old computer to show them what the inside looks like. They'd apparently been bugging her to have me visit ever since she told them that I had a robot. I knew coming in that they'd be horribly disappointed. They were all imagining some android like warrior to follow me in the class and crush a few cars for them. Instead they see my simple hobby machine that's only slightly more impressive and considerably more expensive than a remote control car.

Here's a picture of it, though don't let it fool you. As of yet the laptop isn't hooked up to actually control the robot (largely do to OS compatibility issues) and the arm that looks like its about to plug the robot has proven, after several cracked outlet plates, to be incapable of the task. The goal of the shown robot is to eventually (when I have a year of free time) be the first self surviving, or 'wild' robot. I've written a vision algorithm that detects outlets, what's left is the laptop to robot controls connection and significant work on the mechanics of the arm. 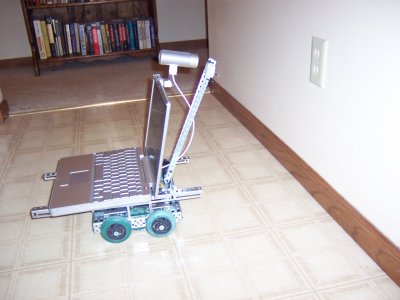