I had the privilege of spending last week at the google campus hacking at the doccom Plone sprint. It was an awesome experience both to work inside the area that justly has the reputation as one of the most awesome places to work, and to take part in Plone's excellent open source community. Here's a cool picture, you can find more here. 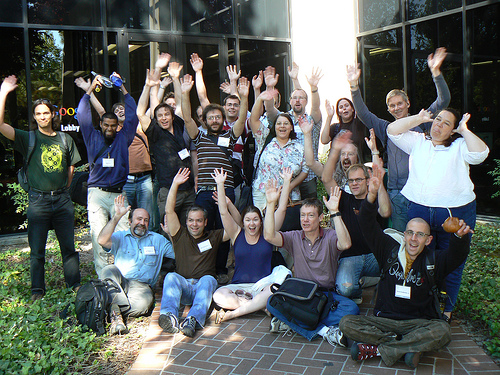 Unfortunately I had class on the day we got the full google tour of the cafeteria and the campus center but my experience walking around the site and in our google building on the edge of campus was still awesome. The buildings, landscaping, and streets aren't really anything too spectacular so the first impression is the same as any other office campus. Soon though you notice all the not so little things that google does to make it such an awesome work environment.

First, there are a ton of bikes going around. The campus is fairly spread out so google provides a bunch of bikes. There are also some scooters and its rumored to be a few segways and some sort of 6 person circular meeting bike. Also there are a whole lot of limousine busses that google leases driving around helping the commuting google employees. I never got to see inside of one but they have leather seats and you can bring food and even dogs onboard. I'm jealous of people who can bring a dog to work.

Ofcourse, as everyone talks about, the food and beverages there are free and amazing. I think I drank about 100 smart waters over the course of the week but unfortunately noted no increase in brain activity. Lastly, but most important, the toilets were unbelievable. They had heated seats where you could choose your preferred temperature. It would also wash you and other crazy stuff if you were bold enough. The thing had 20 different settings and can take a while to set up just right. I want to invent a mechanism for it somehow recognize your butt and change to your preferred settings.

The Plone sprint was equally cool. For those of you who don't know what Plone or a sprint is, Plone is an incredible open source content management system and a sprint is an event where a bunch of the people involved in the Plone open source community get together and work on a specific project. This sprint had two projects. There were about 30 people there, half were working on organizing the documentation for the upcoming Plone 3.0 release, and the other half were making Plone GetPaid, an e-commerce product for Plone.

The first half of the sprint I worked on doctests and the getpaid workflow and the second half I developed a python wrapper for the UPS online tools to make a shipment information utility. I'm 90% done with it, I just need to formalize it and write up some docs. I should have a post on it soon, its been a crazy week. Because I'm new to Plone and was gone for the majority of 2 days for class I probably wasn't very helpful, but everyone was very nice and a lot of fun.

The public transport commute to google takes 2 hours and $10 from my apt so I ended up just crashing at the hotels the sprint sponsors funded. I got to meet and hang out with many of the awesome people of the incredibly active Plone community including the infamous Joel Burton and one of the founders, Alexander Limi. The week reminded me of the good life at IBM Rochester; hack all day, drink all night. Except all the food and beverages during the day were free!

Thanks to google and the Plone community for making it all happen. It was my first sprint and first contribution (though small) to an open source project! Hopefully there will be many more to come.